1.  A Great Spin on a Classic Joke

Q: How many estate agents does it take to change a lightbulb?

A: None! “The lightbulb is in excellent working order and comprised of a beautiful retro teardrop illuminator, offering original glass and metal features and located very centrally in the middle of the room. Local amenities abound and the property is serviced by a newly refurbished power cord connecting it to the ceiling. Nearby is a tasteful power switch to enable the purchaser to switch it on and off. Leasehold with share of power supply with lovingly improved wattage by the current owners. Would suit a professional couple or family looking for more light.”

What’s the difference between syphilis and medical office space? You can get rid of syphilis. – Short Woman

Two Texans were sitting at a bar having a drink. The first one says, “My spread is so big that it extends to the horizon”.

To that, the second one says, “Well, my spread is so big that if I get in my car in the morning and drive all day, all night and most of the next day, I still don’t reach the end”.

At that point, the first one looks at him and says, “Yeah, that’s what you get for driving a Kia”. – GeorgeOrr

I’m getting married to a luxury realtor tomorrow. He’s so dreamy. Check out the diamond engagement ring he sold me.

5.  Take Me To Your Contractor

What do great affordable contractors have in common with UFOs? You always hear stories about them, but no one you know has actually seen one.

6. This Lawyer Must Be Amish

Since he was a lawyer, he could not easily lie about his family situation. So on the day a new real estate agent came to meet up with him, he told his 11 children and his wife to go to the cemetery.

During the interview, the real estate agent asked, “How many children do you have?”

Seeing he only had one beside him, the agent curiously asked,“Where are the rest, then?”

The lawyer answered with a sad look, “They’re in the cemetery with their mother.”

And that’s how his agreement was signed, and he was able to rent a new home without lying.

Honestly though, the real joke is the bolded sentence.

What does an appraiser’s wife say if she can’t sleep? “Honey, tell me about your day at work.”

“I need a raise in my commission,” the real estate agent said to his manager.

“There are three other companies after me.”

“Is that so?” asked the manager. “What other companies are after you?”

“The electric company, the telephone company, and the gas company.” – EricaHomesCarolina

Q: How many planning officers does it take to screw in a lightbulb?

A: Six! Four to write an extensive study recommending a three-way 100/200/250 watt lightbulb, one to write a newspaper press release praising the study, and one to put in a 10 watt bulb instead.

Ok, you have to watch this video for the dog impression alone.

A young realtor is out door knocking one afternoon and came upon a little girl sitting on a stoop.

“Hi there, my name is Stacey. Is your Mommy home?”

The little girl nods and says yes, so the realtor starts ringing the doorbell.

After five minutes with no answer, she turns back to the little girl and asks her, “Hey, I thought you said your mommy was home?”

The girl says, “My mommy is home but I live across the street.”

2. Go Ahead and Scratch My Eyes Out

Agent: “This house is great, but it’s really for cats.”

Agent: “It will take you nine lives to pay off the mortgage.”

What room in your house are zombies most afraid of? The living room.

If Forrest Gump ran a property management group, what would it be called? New Tenant Dan

Why was the realtor in counseling? They couldn’t get closure.

Einstein dies and goes to heaven. First person he see he asks, “Excuse me? What’s your IQ” The person replies, 280. Einstein says, great! We can talk about astro physics!

2nd person he runs into he asks the same question, what’s your IQ? The person replies, 150. Great! says Einstein, we can talk about events of the day!

3rd person he sees he once again asks about their IQ. This time the person says 45! Einsteins says, Great! Where do you think the real estate market is headed??!! – Dubsland12

What’s the difference btw a realtor and a picnic table? The picnic table can support a family of four. – Ltspla

Hey, I might be looking to find a new brokerage. How many agents work at your brokerage?”

5. You Should Be Ashamed

An old man was on his deathbed. He wanted badly to take some of his money with him. He called his priest, his doctor, and his real estate agent to his bedside.

“Here’s $30,000 cash to be held by each of you. I trust you to put this in my coffin when I die so I can take all my money with me,” he said. At the funeral, each man put an envelope in the coffin. Riding away in a limousine, the priest suddenly broke into tears and confessed,

The real estate agent was aghast and said, “I’m ashamed of both of you, I want it known that when I put my envelope in that coffin, it held my personal check for the full $30,000.”

Q: How many estate agents does it take to change a lightbulb?

A: Ten! One to hold the bulb, eight to turn the room around the bulb, and one to charge you 1.5% commission to cover costs.

In case you’re still in the mood for self-deprecating real estate agent humor…this video is gold.

Hey, girl, are you a mortgage? Because you’ve got my interest!

Ninety percent of the people in this city hate carpeting. The other 10% just hate your carpeting.

Real estate agents need to laugh at their problems. Everybody else does.

The only problem with being on time for your showings is that no one else is there to appreciate it.

“Finally figured out how to make a quick million bucks in real estate. Start out with 2 million, and no time at all, you’ll have a million left!”

*Actually, we just hope to find a landlord that isn’t a life-sucking money leech.

If you ever feel like no one cares, miss a mortgage payment.

The video below is my personal favorite when it comes to funny real estate joke videos. The acting is *chef’s kiss*.

"The Crazy Buyer" (Must Watch)

1. For the Dad in Everyone

Did you hear about the last remaining unit in the apartment building? It was last but not leased.

2. I Can Hear the Dads Clapping

Someone asked me if I read Realtor Magazine. I said yes, periodically.

What do agents have to be thankful for? Lots.

4. They’re Real Estate Dad Jokes. What do you expect? 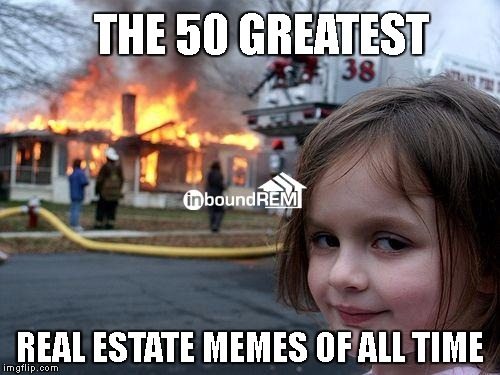 2023 kvCORE Review – Pros and Cons from an Expert User